You don’t need to outsource porting 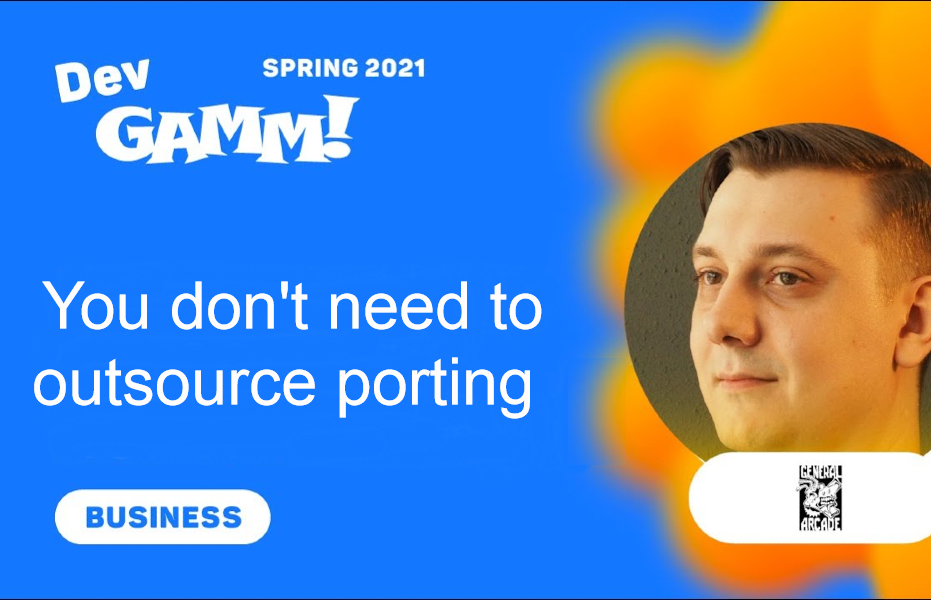 What is porting and what steps does it involve? What are the common pitfalls? What is quality adaptation? Is it possible to make the port on your own or do you need to involve the help of a third-party studio? What are the pros and cons of outsourcing the porting process? Gennadii Potapov, CEO of General Arcade, covers these and related issues in this lecture made at DevGAMM 2021 conference.

If you speak Russian, you can just listen to it while watching the video, or you can read the full lecture in English right here!

— Hi Everyone! My name is Gennadii Potapov. I’m CEO and co-founder of General Arcade — a porting house and co-development studio based in Singapore and Russia. The company was founded in 2013. We provide engineering outsourcing, with the main focus on porting.

My talk is called “You don’t need a Porting House!”.. I know it’s a cheesy name, it’s a nod towards Devolver Digital’s Nigel Lowrie talk “You Don’t Need a F-ing Publisher” (if you haven’t seen, it’s great, check it out, it’s on GDC YouTube channel). My intention for this talk is to pass information, shed some light on porting processes, challenges, common pitfalls, and talk about the pros and cons of in-house porting versus outsourcing to third-party companies.

It is worth mentioning that my presentation is mainly intended for new developers who are working on their first or second title and exploring options on developing console adaptations.

Every time we receive an RFP, we get a lot of questions about our work. And it’s pretty surprising how many developers don’t know much about console porting and the processes involved. Not only new devs, but people with experience as well. It’s not bad, just a bit unexpected. A few years ago at GDC, nonetheless, at the networking party. Remember the time when we had physical events? After I introduced myself and what I do, one person asked me: “Aren’t your company services obsolete because we have Unity now? You just press one button and the port is done…” Not gonna lie, I was shocked for a few minutes. And we need to compliment the Unity marketing team here. Even though it maybe was not correct to write off the whole porting industry just because of Unity’s existence. He is kind of right in one thing —  in many cases, you don’t need a Porting House and can produce ports yourself.

But let’s start from the beginning. What is porting? Porting is the process of adapting software for the purpose of achieving some form of execution in a new environment that is different from the program was originally designed for (e.g., different CPU, operating system, or third party library). In the context of this presentation, we are talking about the process of porting games to consoles.

Obviously, game porting and porting houses are not a new concept. If we look back in the late 80s and mid-90s, there were so many different platforms. Many of these systems found favor in regional markets. Both hardware and software were very different in those systems. Making the development and porting games incredibly hard. And of course, there were no cross-platform engines and tools. That’s why there were companies — porting houses. Did you know that the first company John Romero founded before id Software was a studio called Out Software, and it was a porting house, which mainly did Apple II ports?

Today we basically have only 5 platforms (PS, XB, Switch, PC and iOS, and Android) and more importantly access to powerful cross-platform engines and tools that are very easy to use. Platforms themself are very similar to each other. So how is it nowadays to port a game? Is it as simple as pressing one button in Unity? Let’s go step by step through the process of bringing a game to current or next-gen consoles.

That’s a lot of steps. So where can Unity or other cross-platform engines help you? Only in Make sure the game runs on the console and Optimize the game. And even that is a bit of a stretch. You are most likely to face issues with shaders, memory allocation, resources loading, and others. Those are not hard to fix, but you need to know where to look. Don’t get me wrong it’s still a huge timesaver to use cross-platform engines, but unfortunately, it’s not just a press of one button.

Anyway, as I said before, that’s a lot of steps but everything is doable. It’s not rocket science. So why do people outsource porting?

Most studios can do ports in-house. And we’ve seen a lot of indies do that. We also see that many studios don’t want to do it themself because porting houses can do it more efficiently, while they can concentrate on making more content or new games.

Let’s look at the pros and cons of porting in-house. It’s basically the same slide but more structured.

If you decide to work with a porting house what do you need to know?

What makes a great port? It is the last topic I want to cover. I believe it’s very important to understand what makes a great adaptation. Let’s go with reversed logic and remember a very bad console port to PC. You know what kind of games I’m talking about.

So based on this we can easily get a recipe for a great port.

There can be other things, but I think those are the main ones. If you can nail all those, your port would be great.

Unfortunately, the realities of the game industry are that we often operate on a tight schedule and budget, and the wrong choice can cause significant damage, which sometimes could even lead to an end of the studio. I didn’t provide an answer or solution in my talk, but I hope I gave enough details to make an informed decision that would work in your situation and your game.

Where General Arcade came from